Buy Low Sell High - How to finish a damn game 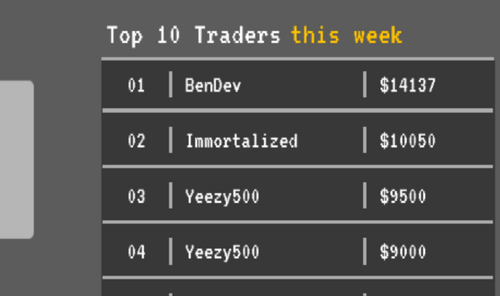 So I meant to make this game in two hours to figure out making dev videos.

That failed miserably.  By two hours I had given myself another hour to finish up, and then three weeks and sixty plus hours of development later I released this game on itch.io.  In about three days I had a prototype with all basic features, but then I decided I wanted an online highscore list, and that ate up another week, and scope creep pushed me all the way to a three week full development cycle.

That's literally (60 / 2 ) = 30x the work I thought this game would take, but I actually completed what I set out to do, and for me that's a huge triumph, and I think I've learned a lot from taking this approach to game development.

Because it was only supposed to be two hours, I had the entirety of the project in my head from start to finish.  I needed some graphs, some buttons, a start screen and an end screen.  I was laser focused on marching my way to release, and if I wasn't, this game would have ended up like the dozens of other projects I've abandoned.  I also tried recording myself developing for the first time and that increased my focus by an order of magnitude, if you haven't tried it it's seriously a godsend for ADHD.

I made the highscore system myself from scratch, including the sql database, php server code and game side code, which I'd never done before.  There are easier ways to do that, but it was super valuable to do it myself, and I'll probably do a another post about that process, so follow me if you want to learn how to do that.

So yeah, check out my game, get your name immortalized on the online highscores.  Have fun :)

(Play in Browser) Play the stock market to make money for no reason just like in real life.